I know I just showed it… but this is a grade-A title card; too big, too loud, too garish, so spot on considering the context of the movie.

This entire opening credit sequence is great. It gives us plenty of unforced narrative exposition; it’s fun, it’s quick, and it was done on the cheap, without looking so. The song is nice foreshadowing too.

This is certainly one of the finest opening shots to any movie of the past 15 years. It tells us so much about the world we’re in and who we’re being introduced to. From sold out stadium to kindergarten classroom.

Randy “The Ram” Robinson (Mickey Rourke) spinning this guy around so naturally, so that he can sign an autograph. He’s done this thousands of times.

Really nice, subtle lift off the ground here, with Clint Mansell’s chilling music easing in. It’s little touches like this that help a $6 million-dollar movie feel much more expensive.

I’ve always loved how Randy starts by gently tapping on his manager’s door, then straight up pounding on it. He can’t just knock; he can’t just do the simple thing.

The ease in which Randy gets ready for bed in his truck… there’s a routine to his movements that is so damn sad.

I love that the first time we clearly see Randy’s face, he’s playfully wrestling with a bunch of kids.

So cool that Todd Barry is in this. He’s an unexpected choice, but he plays this Wayne goof so realistically.

I LOVE the way you can hear and feel the energy change when Randy walks into this locker room. These guys really do respect him.

Tommy (Tommy Farra) is the best. His appreciation for Randy’s praise is so genuine.

This exchange is classic.

Nice bit of sound design right as The Ram cuts his forehead. It sounds like that razor feels.

Medic: “You’re all set.” While Randy’s face continues to bleed. Can he get a band-aid?

Rourke’s delivery of “I’ll take a cold one,” is damn near my favorite line reading in the film. I love the way he says this.

Randy checking himself out in the mirror before he goes to see Cassidy (Marisa Tomei).

The first interaction we see between Randy and Cassidy is great. In just 25 seconds, we know exactly who these two are to each other. And Cassidy pretending to hit Randy with the chair is such a nice touch.

Scott Siegel is great as this drug dealer. And damn, he must have some story behind the scar on his head.

This just feels like Mickey Rourke to me. Getting his hair dyed, drinking a muscle shake from the container, making pleasant small talk.

The way Randy takes his jeans off before he goes tanning. Again, this is not a guy who knows how to do things the easy way. All that loose change he’s kicking around, I guarantee he tries to pick that all up later.

The way this brutal match is conveyed is ingenious, specifically how the sequence is edited together non-linearly. Every other scene in this film is told straight, chronologically, but that narrative departure here injects some energy into the film, and perfect sets us up for the second act. Great filmmaking.

This has to be one of the most realistic depictions of a heart attack in film. The fear mixed with resistance in his face is so believable.

I don’t know many times I’ve seen the waking-up-confused-in-a-hospital-bed scene, but I don’t know if it’s ever been more convincing than this.

God, I adore Randy’s back-to-camera admission of his drug abuse.

Again, we’ve all seen this scene dozens of times. The athlete being told that they can never compete again. And I love how simply it’s conveyed here. Just a simple shot reverse shot, with a really empathetic actor as the doctor (Armin Amiri), and a really broken Rourke. No flashy sound effects, focus pulls, or POV shots (all so common in scenes like this); just beautiful acting, simply told. 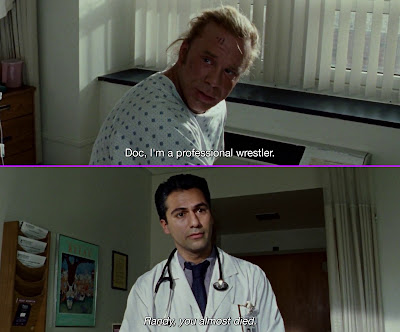 This poor guy. All that fame, all that glory. And now he doesn’t even have anyone who can give him a ride from the hospital after his heart attack.

Like… we’re in minute 40 of this movie. This guy has already had two matches, a lap dance, and a heart attack, and he’s just now getting back into his home.

Maryse Alberti’s cinematography in this film deserves endless credit. Alberti has extensive experience shooting challenging documentaries, and that immediate, cinema-verité approach marries perfectly with The Wrestler. The shot highlighted here really caught my eye, because it’s one of the few zoom shots I noticed in the film. We almost feel like we’re watching intimate moments with Randy that we shouldn’t be allowed to see. Almost like a documentary. 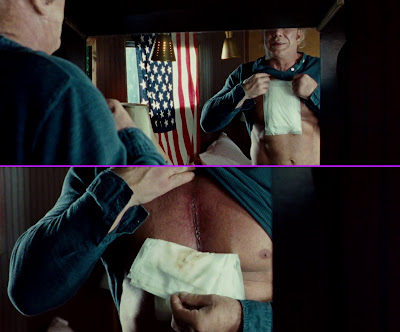 Also a great time to mention how sparse yet effective Clint Mansell’s original score is. Mansell knows how to go big when the material warrants it (he did the music for Requiem for a Dream, after all), but his light strings in The Wrestler are a perfect accompaniment to Randy’s isolation.

He’s so damn good with the kid. So natural and kind. I love Rourke in this film.

Stephanie’s (Evan Rachel Wood) reaction to Randy’s heart attack is so well earned. We only just met this woman and we understand where she’s coming from right away.

When The Wrestler came out, 30 Rock was at its peak popularity. And it still took me two viewings of this movie to realize this was Judah Friedlander.

I’m so glad we get to spend a little time in Cassidy’s world, because we really get to see that she’s excited when Randy shows up at her club. 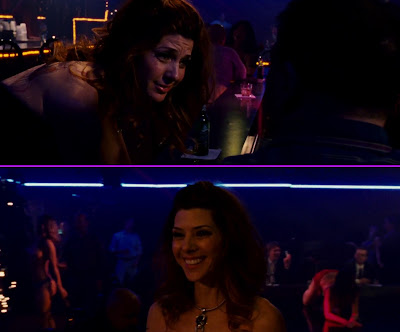 Wayne doesn’t even bother to turn off what he’s watching. Tough flex.

Can you imagine this scene taking place during a bright sunshiny day? Or any scene in the film? This movie is steeped in such a gray dread.

I love the way Randy runs to his car like a little kid.

Randy’s exchange with this woman is great. He really seems to adjusting to his new role as best he can.

Love that Randy takes this flyer, crumbles it up, and puts it in his pocket. Most people folder papers they want to hang onto.

Obviously this scene has been talked about plenty, but I have to mention it. Again, I want to draw attention to how simply told this is. Three shots: one establishing master, one over-the-shoulder of Wood, one over-the-shoulder of Rourke. No non-diegetic sound (SFX, music, etc.), no camera tricks, no editing gimmicks. The performances are the stars. Famously, Rourke rewrote much of his dialogue here. It could be the moment of his career. And the fact that Wood says nothing but still matches Rourke’s empathy is astounding. Best scene of the film. 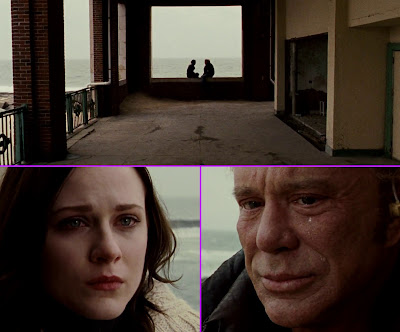 Love the way Stephanie kicks this door open. She has a little of her dad in her, after all.

Randy asking Big Chris if he wants a drink (off screen) while Randy is being bounced out of the club. Hilarious.

The Wrestler is a simple film, and simple films really come down to choices. Just imagine if Randy decided to stay home tonight, and not go back out. It’s not exactly conducive to look at life or movies in this “What If” way… but if Randy crashes at home early this night, then he’s likely still alive today. I love that Aronofsky lets the movie have this moment.

And there it is. Your ill-timed night of fun made you miss the dinner with your daughter. And soon, in the absence of nothing, you choose death. Brutal.

This is such an effective movie argument, thanks to how well it is played. Wood is firing away, and Rourke is a defeated beast. To see how Rourke got into character for this scene, you must watch the incredible Making-Of feature for this movie. The footage of this scene is so memorable.

This is so wrenching, because at the end of his heartfelt plea on the boardwalk, Randy said to Stephanie, “I just don’t want you to hate me.” And now here we are.

If you listen closely, you can hear Wayne even being a prick off-camera.

LOVE the elbow to the Wheaties box.

This poor damn guy. For likely the first time in his post-stardom life, he finally found someone he can have a genuine connection with. Yet he rejects it. Why? I’m not sure we’re supposed to know. Does Randy? This is the most significant moment of the film to me, because it proves that for the rest of Randy’s life, which may be 10 minutes or 20 years, he will only ever find solace in wrestling. 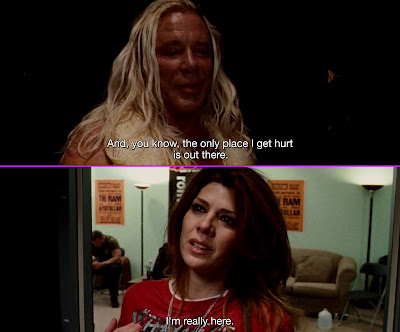 This ain’t Randy “The Ram” Robinson talking here. This is Mickey Rourke. That was his Oscar.

Rourke’s stunt work in this really is impressive. He does this move in one shot; you can just tell he took his training seriously. 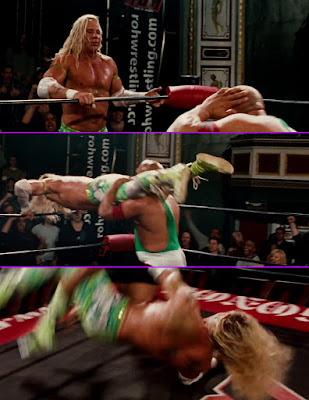 I always appreciate when a movie starts and ends (give or take) with similar sequences. 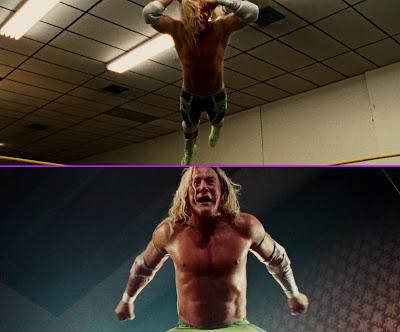 This is a perfect final frame to end this movie with. Unfocused, cluttered, bothered.

The screen is black for 30 full seconds before the first end credit appears. That feels deliberate. I’ve personally always registered that as moment of pause in honor of Randy’s death, with the eulogy being sung by Bruce Springsteen in the background.

For more on The Wrestler, check out my podcast episode about it! Nick is fanatical about pro wrestling, and also shares some similarities to Evan Rachael Wood’s character. Fun and emotional episode.